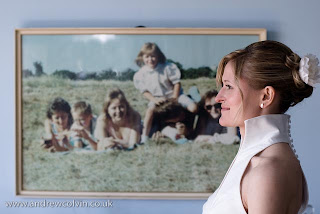 Two weekends, two countries, two weddings, a small volcanic crisis and an awful lot of work to be getting on with.

First up were Genevieve and Dominic in Surrey. WIth 120 plus evening guests this was a sizeable wedding with over twenty immediate family on one side and a large Spanish contingent on the other. It was also my first shoot with Alex Brenner who was a pleasure to work with and produced some first rate shots. It really does make a difference when clients request a second photographer as simply having cameras in two places at once makes huge difference and also meant that I could spend longer with the bride than normal as she got ready at her parents’ house, knowing that Alex was at the church. It also means twice as many pictures to go through afterwards of course, but hey.

The following Saturday was the much more informal Anders and Mia in Västra Götaland, fortunately catching one of the last flights across before a small volcano managed to shut down half of European airspace. While a smaller party, they more than made up for it in enthusiasm. Like all good Swedish weddings, there were speeches, songs and poems to the newly-weds aplenty ranging from the comic to deeply moving and from what seemed like nearly everybody present. We were also lucky enough to have some very dramatic light coming through the woodland around the venue which was perfect for a portrait session before the guests arrived.

Was supposed to be flying back to Britain tomorrow but without any fixed appointments until next week I can afford to wait a while to see what happens before joining the luckless hordes trying to catch boats from Copenhagen. Provisionally my flight has been rebooked to next Tuesday, but we’ll have to see if Ryanair holds good for me. Luckily with two weddings now on my hard disc in RAW, I’ve got plenty to be getting on with.